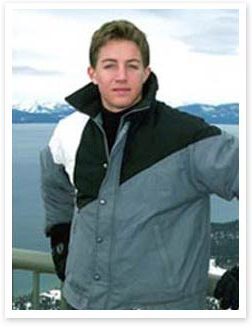 At age 15, Robert played tennis for the Westminster Academy High School tennis team. Although only a freshman, Robert worked his way up to 2nd position and was skillfully winning matches. His backstroke, however, was causing him pain.

He later learned that his spine was out of alignment, caused by a condition called scoliosis. Left untreated, scoliosis would continue to affect his enjoyment of athletics — including tennis and snowboarding — and could lead to problems with his back, lungs and heart later in life.

After careful consideration and thorough research, Robert and his parents, decided he would undergo surgery at Joe DiMaggio Children’s Hospital to correct his scoliosis.

Scoliosis Defined
“Scoliosis is a lateral (sideways) curvature of the spine,” says Michael Jofe, MD, Chief of Pediatric Orthopedic Surgery at Joe DiMaggio Children’s Hospital, and physician on the medical staff at Memorial Hospital West and Memorial Hospital Pembroke. “It may present itself in early adolescence and may remain moderate, or progress into a severe degree of curvature.”

Robert’s Story
“Robert experienced a big growth spurt at 14 that worsened a curvature in his spine. When it began affecting his athletics, he was eager to go ahead with surgery and get it over with,” says his mother, Irene. “We kept telling him it was a big decision and would require taking a year off from tennis, but he was willing to make the sacrifice if it meant he could play sports again without pain.”

According to Irene, “After much reflection and thorough research on Dr. Jofe and Joe DiMaggio Children’s Hospital, we felt at peace about proceeding with the surgery. We discussed the surgery and all of its implications with Dr. Jofe and the amazing staff at Joe DiMaggio Children’s Hospital. Everyone we spoke with answered our questions and put us at ease. As a parent, it is frightening to consider such a major operation for your child, yet the entire staff was informative, caring and helpful. Then, Dr. Jofe told Robert that a former patient of his had undergone this surgery and went on to become a Navy SEAL. That sealed the deal for Robert.”

On June 14, 2004, Robert underwent spinal fusion. Following almost 3 hours of surgery, Robert’s parents visited their son in the recovery room. “The surgery went well, but he was in a lot of pain. Fortunately, we had prepared ourselves for what would be involved in his recovery, and we knew we had to tough it out. The ICU staff took incredible care of Robert — and my husband and me, for that matter — and we couldn’t be more grateful. They were all phenomenal!”

Today, Robert is happily recovering. He grew 1½” following his surgery, and although he cannot participate in sports for the next 3 to 6 months, he’s found a new interest. “We just bought him a drum set. This hiatus from sports gave him the opportunity to learn something he may never have tried otherwise,” says Robert’s mom. “We’re incredibly pleased with the results of his surgery and would highly recommend it to other parents. I can’t say enough wonderful things about our experience at Joe DiMaggio Children’s Hospital.”