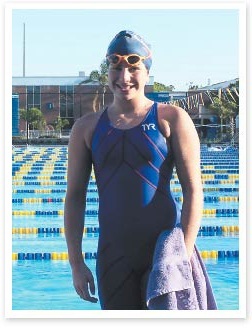 A 12-year-old Boca Raton competitive swimmer is three inches taller and looking forward to her next race after undergoing surgery for scoliosis at Joe DiMaggio Children’s Hospital. There’s no stopping her now.

Becca was diagnosed with scoliosis in fourth grade after her pediatrician discovered the lateral curvature of her spine during a routine check-up. “Becca was never in pain,” her mother Lauren says. “You never would have known there was a problem.”

Lauren took Becca to an orthopedic surgeon who prescribed a brace, which Becca wore for three years, taking it off only for swimming, the sport she’s so passionate about. Becca, a competitive swimmer, counts eight Florida Gold Coast swimming medals among her accolades and last year, became the youngest entrant in the Florida Keys Community College 12.5-mile race around Key West. She took first place.

Although the surgery is about 50 years old, Dr. Jofe explains, more recent instrumentation called pedicle screw fixation offers patients increased correction and a quicker recovery. Rather than hooks and wires, screws are placed into every vertebrae and attached to rods, allowing for increased correction of every component of the spine.

“He explained that the longer we waited, the longer the rods would have to be and the more flexibility she would lose,” Lauren says. “As an athlete, we didn’t want her to lose flexibility.”

Compassionate, Family-Centered Care
In January 2006, Becca underwent surgery at Joe DiMaggio Children’s Hospital. Lauren says the anesthesiologist updated her regularly and that the nurses who cared for Becca during her four-day hospital stay were incredible. “In the beginning it’s scary,” Lauren says. “They did everything for her. They were wonderful and explained exactly what would happen. There were no surprises.”

Best of all, Lauren could remain at Becca’s side since the hospital offered a free lunch and she could shower at The Conine Clubhouse, a home-away-from-home for families with hospitalized loved ones. “They think of everything,” she says. “The whole experience was wonderful.”

Remarkable Recovery and Return to Competition
Becca agrees. “I was back in the water after two weeks,” she says. As a bonus, she was three inches taller, a result of the surgery, and got a new wardrobe. “She was really remarkable in her will to get better,” Dr. Jofe says. In fact, she entered the Key West swim race again in June, just six months after her surgery. “Not only did Becca finish the 12.5 mile swim,” Lauren says. “She won it! Her time was 10 minutes faster than last year.”